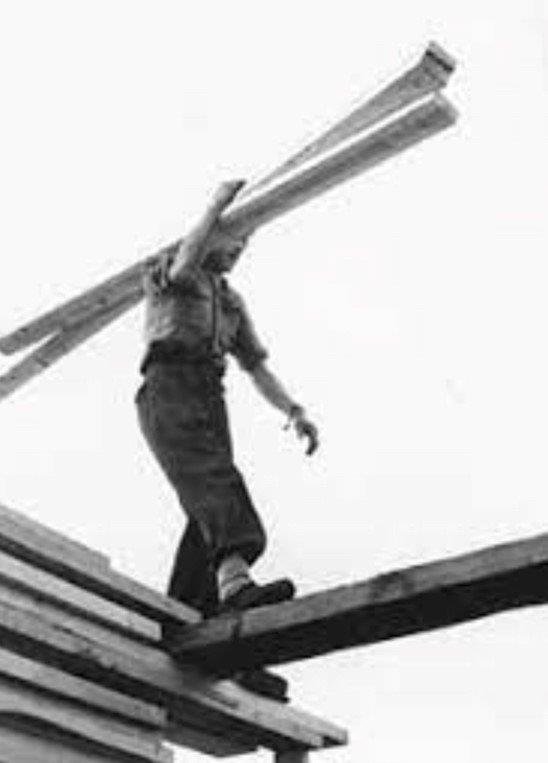 1920's A LITTLE BIT OF A WINDOW ON UNIONS AND WORK IN  THE 1920's A surviving agreement between the employers and the Dock Wharf Riverside and General Workers Union who controlled the labour that every timber yard employed shows that the working hours in the timber yard on weekdays were 6 am to 5 pm in summer (7 am start in winter), and 12 noon finish on Saturdays. There were breaks of 90 minutes for breakfast, 60 minutes for lunch, and 30 minutes for bait each morning and afternoon. The British Waterways owned the canal banks and about 15 feet (4.5 m) in to each property leasing this ransom strip to each company for storage . You can see this behind Lidl next door . This gave them control over moorings , and the unloading of vessels , as soon as a boat docked only Waterway labour was allowed to cross this strip so ALL boats were unloaded by Union dock labour from boat to yard where Nicks employees would pick up and store. This was done on an agreed Piecework pay rate for men discharging lighters and carrying deals to piles in the yard, with additional money for carrying more than 80 yards, and day-work rates were agreed for taking wood from pile for dispatch. The height of the piles was not to exceed 80 three-inch deals or equivalent (20 ft) in order to limit the height of the lines of planks supported by trestles along which the men ran when carrying the wood to pile .  By the end of the 1920's, some ships used in the timber trade were too big to enter Sharpness, and Nicks &amp;amp; Co received some imports as part-cargoes discharged at larger ports such as Avonmouth and sent on by barge . Another timber shed was built to the north of the mill in 1927 ,