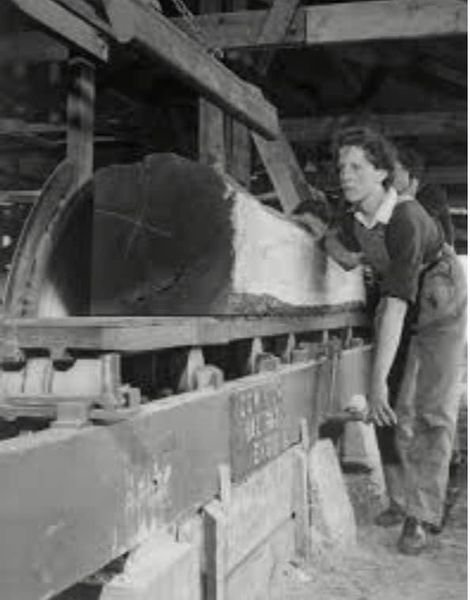 In July 1939, Nicks &amp; Co agreed to take half of a cargo of 600 standards of spruce being shipped from Digby and St Johns in Canada, with neighbours Griggs &amp; Co taking the other half. To aid discharge, Nicks &amp; Co asked for their half to be put up one end of the vessel and our neighbour’s half at the other end as the two firms used different lighterage firms on the canal between Sharpness and Gloucester. However, while the steamer Rimfakse was in transit, Britain declared war on Germany, and the government of Norway (where the ship was registered) ordered the ship to dock at Queenstown, Ireland, rather than sail to any country at war. After urgent communications between the various parties, Nicks and Griggs agreed to pay the extra war insurance, and the ship arrived at Sharpness on 15 September . With Britain at war, the Ministry of Supply took control of the timber trade, arranging all imports and issuing licences to recognised timber merchants to sell from the national stock. Nicks &amp; Co then took on the role of wharfingers, receiving and storing timber and selling to approved customers. In November 1940, the coaster Ngatia brought a cargo of timber to Nicks’ yard from a big ship that had discharged at Milford Haven, and for many years this was thought to be the last coaster to discharge at the yard (but later events proved this fear wrong). In 1941, concern grew that the concentration of timber yards beside the canal at Gloucester was vulnerable to enemy action, and arrangements were made to disperse much of the local stock to sites further down the canal and to other places further inland. The photo taken at Nicks yard of the Auxiliary Fire Service which were based at Nicks during the war years . The Women’s Timber Corps was a separate branch of the Women’s Land Army and was started in 1942 due to the German occupation of Norway  causing a shortage of imported timber.This branch received even less recognition than the typical Land Girl. The WTC uniform was slightly different as ‘Lumber Jills’ had a ‘beret’ instead of a hat and had a different arm band. Their badge showed a fir tree, as opposed to the sheaf of wheat for the Women’s Land Army.More so in this type of work, the women worked alongside men who had to teach them everything about chopping of the tree, through to loading it onto a lorry. The work didn’t just include the wielding of an axe, but also the skilled work of measuring of trees and the undertaking of the administrative work out in the forests.Lumber Jills worked from 7am to 4:30 – slightly shorter when compared to the girls on the fields. This created some barriers between the different branches of the Women’s Land Army, as  Land Girls often thought the Timber Corps had the ‘soft option’. Nevertheless, as part of the interview process, Lumber Jills had to pass a stricter medical examination than Land Girls. This kick started the wider development and use of “ Home Grown “ product which today makes up 25% of Uk consumption . With his three sons now in the Buisness Tom Drury had a difficult decision to make as only one could claim reserved occupation and not enlist !