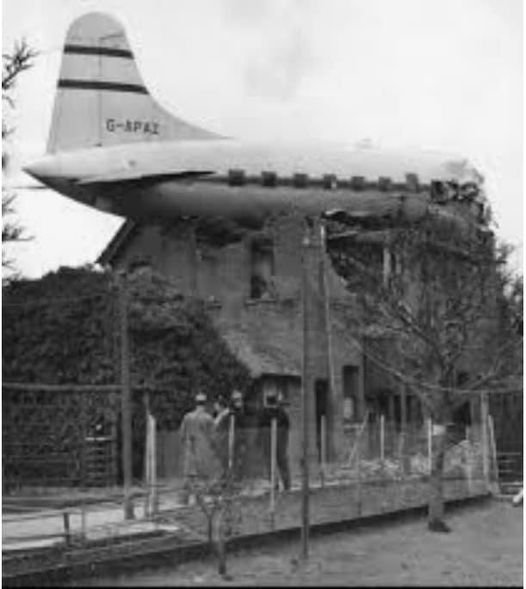 Unfortunately, the author has been unable to locate where Kelston Thomas was buried. The most likely candidate is Arnos Vale Cemetery in Bristol, which was the nearest cemetery to his family home in the city. Although Bristol Record Office holds the registers for this cemetery, they are currently unavailable for public consultation due to legal reasons.

A few days after its recovery from Tuffley Avenue, the remains of the Varsity were quietly removed from Staverton and taken by road to RAF Aston Down. Here, the Air Ministry’s inspectors were able to begin their work in earnest to try and determine the cause of the crash. As part of this all paperwork relating to the Varsity was checked to see whether any lack of maintenance or servicing on Smith’s part might have contributed to the crash [xxiii] Everything was in order however and this was all subsequently returned. However, one vital piece of evidence was determined quite early on from the examination of the aircraft’s fuel system. After checking the engine oil and fuel filters, both of which were clean, the fuel feed mechanisms were examined and here it was found that the electric actuators for the engine idle cut-offs for both engines were closed. This indicated that the position of the cockpit ICO switches noted in the initial examination at the crash scene was correct (i.e. were both in the cut-off position) and that the impact had not caused them to move [xxiv] A few days afterwards, both engines were crated up and shipped to Bristol Siddeley Engines Ltd where their engineers performed a full strip down inspection. This subsequently concluded that no mechanical fault had caused the engines to fail. It also revealed another fundamental piece of evidence in that the damage suffered by the engine reduction gears indicated that neither engine had been under power at the time of impact. Eight days after the crash, the Air Investigation Branch convened an afternoon hearing at the New Inn in Northgate Street, Gloucester to collect witness statements. A total of 17 were taken from witnesses whose occupations included housewives, schoolteachers, school children, engineers, policemen, RAF officers and pilots. Present at this hearing was Mr Jones of the solicitors W C Davey Son &amp; Jones of Cheltenham who represented the relatives of Kelston Thomas and Mr Littler, of the solicitors Cartwright, Taylor Corps, representing Smiths and the Varsitys insurers. At 1430 on Thursday 18 April, the Gloucester City Coroner re-opened the inquest into the deaths of the pilots, this time at the Magistrate’s Courthouse in front of a seven-man jury Since the adjournment in March, the Coroner had taken a large number of statements from witnesses, although only 17 witnesses were actually called to give evidence. Though the purpose of the coroner’s inquest was to determine the cause of death of the pilots, one question that the coroner wanted to know the answer to was how common single-engine overshoots and over-flights of built-up areas at Staverton were. He voiced these concerns on two occasions, once to Keith Dougan when he was giving evidence and once to William Johnson. Although Dougan - pilot of Smith’s Miles Gemini G-AKHY, pictured above, on the day of the crash - replied that “This was a special occasion. It is not usual” [xxviii], Johnson contradicted this by saying that he didn’t think overshoots on Runway 22 were unusual [xxix]. This was not discussed at length however and the inquest wound up the following day when the jury returned a verdict of accidental death on both of the pilots.

THE CAUSE OF THE CRASH

THE TALE OF TWO ADVERTS

When the verdict of the Coroner’s Inquest was reported on page ten of The Citizen on 19 April 1963, it wasn’t the only reference to the Varsity crash in the newspaper for by coincidence or design, Sparrow’s had placed an advert. This was a quarter page advert and showed a photograph of the Lorain crane lifting the wreck of the Varsity at the crash site with the caption “For all your lifting problems…consult Sparrows crane hire ”At the time, this caused little apparent fuss and none of The Citizen’s readers commented it on in the paper’s letter page. This was not the same 30 years later when the insurance company Commercial Union used a similar image - with the caption “Don’t worry. You’re with Commercial Union. The Citizen decided that this advert, which was only run in Australia, was in bad taste, which is somewhat hypocritical when it made no such inference with the Sparrow advert in 1963 and was also happy enough to charge the company for the advert. The Citizen justified its stance by bringing attention to the fact that the advert was misleading. This was because Commercial Union had been the insurers for 189 Tuffley Avenue in 1963 and the firm hadn’t settled the claim until 1968, five years after the crash. The newspaper also argued that the rest of the wording – that the company “settled claims quickly and fairly” was also deceptive, especially as the paper pointed out that the claim payment was made only after intervention by the then City M.P. Jack Diamond. The house itself lay derelict after the salvage of the Varsity and on 27 August 1964, it was announced that it was to be demolished. Although the Air Ministry had fairly promptly settled a claim with the Drury family for compensation, this had been based on the fact that the Longmead was to have been rebuilt, but in the space of 18 months it had deteriorated to the extent where the architect in charge had advised that both Longmead and 187 should be pulled down. This took place later in the year and the building was subsequently replaced by a modern, rather soulless three-storey structure, reminiscent of a decapitated tower block. There can be little doubt that the crash of G-APAZ was caused by pilot error and that the Air Ministry’s investigation reached the correct conclusion. In general, the Varsity was a fairly safe aircraft and some are still flying today. Of the 163 built, only 17 have been lost through accidents and all except three of these losses were RAF aircraft. All of these crashes have been attributable to pilot error and given the nature of the RAF use of the type at the time, this is probably to be expected. The worst crash in terms of loss of life was the most recent, when Varsity G-BDFT of the Leicester Aircraft Preservation Trust crashed on 18 August 1984 with the loss of all 11 onboard [xxxvi] In the intervening years since the loss of G-APAZ, much speculation has taken place discussing whether Russell Palmer and Kelston Thomas were heroes in that they deliberately avoided hitting Ribston Hall School. This attitude is not surprising as both men were popular, well-respected members of the local aviation community and their deaths came as a great shock. Russell Palmer, especially, had a national reputation as a pilot and test pilot. In all probability however and without denigrating the memories of these two fine pilots, the fact that G-APAZ avoided crashing into the two schools was more a matter of luck than judgement. Given the situation they found themselves in, the pilots were not really in a position to do much about it and in all likelihood they were just concentrating their efforts on trying to reach the Crypt playing fields – which would have appeared as a splash of green in a sea of red brick and grey roof tiles below them. Despite this there is no doubt in the author’s mind that had the two men not been better pilots then the Varsity may have crashed earlier than it did or, continued its turn to starboard before it came down. The first scenario would have seen the impact occur in the streets of Tredworth, while the second would have resulted in a crash somewhere along Southgate Street, probably close to the Docks - pictured above in 1969. If either had been the case, the impact would probably have been far more devastating and the death toll would have been much greater.

The merits of having an aerodrome so close to two major urban conurbations has often arisen and discussed by the authorities (not least by Gloucester City Council and Cheltenham Borough Council who now own and operate the facility on a joint basis). Despite the attendant risk, the author feels that Staverton – now officially known as Gloucestershire Airport – has much to offer and should remain as an active aerodrome (if only to prevent local planning authorities from building on the site!). At the time of writing the airport’s future, which was once in serious doubt now secure. Much rebuilding work has taken place and the facilities have changed beyond recognition since the days when Smiths took control. Although only one commercial airline - Citywing - operates out of the airport, Gloucestershire is still busy with a large number of aircraft movements and much commercial investment. As well as various private business jets there are several flight training schools based at the airfield together with two private flying clubs. Another frequent user is the RAF, who use Staverton as a refuelling facility for rotary wing operations (and pay for the privilege). Acknowledgements I would like to thank the Staff at the following places for their help with this article: RAF Museum, the Civil Aviation Authority, the Gloucester Coroner, Gloucestershire Constabulary, US Navy Historical Centre, Air Historical Branch (RAF) MoD and the RAF Personnel Management Agency (formerly based at RAF Innsworth), MoD. I would also like to thank Bernard Seeley (Churchwarden of St Peter &amp; Paul Church, Felixstowe) and my colleague Vicky Thorpe (for photographs of Russell Palmer’s grave). Bibliography Card, F., 1993 Whensoever: 50 years of the RAF Mountain Rescue Service 1943-1993, The Ernest Press, ISBN 0948153237