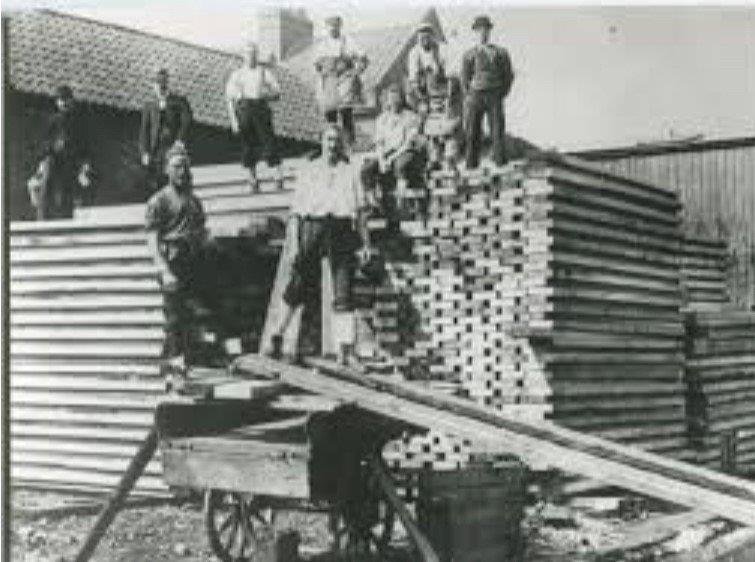 1860 to 1870’sIn 1860, Nicks &amp;amp; Baxter were joined by Henry Morgan Hooper, who with his former partner Joseph Robert Sanders had traded from the neighbouring yards to the south. These had a canal frontage of 63 yards, and the enlarged firm took them over, thereby more than doubling the previous area . The firm did not have their own saw mill and so presumably employed hand-sawyers, although they may also have used a nearby saw mill owned by Samuel Moreland (who later became a celebrated match manufacturer)  Benefiting also from the ending of the war with Russia, in 1860 Nicks &amp;amp; Co dealt with 13 ships from Baltic ports, 11 from Canada, 2 from Gothenburg and 2 from Savannah, Georgia. Most cargoes were primarily softwood deals and battens with some baulks, but those from Savannah comprised large pieces of pitch pine. There were also four smaller cargoes of slates from Portmadoc. Goods for customers in the Midlands could be forwarded by canal boat or via the Midland Railway which had a yard at the southern end of Bakers Quay.The prosperity of this period allowed William Nicks to build Greville House, a fine new residence on the west side of the Tewkesbury Road (now the Gloucestershire Club.As well as running his main business, Nicks was a leading promoter and founding Director of the Gloucester Wagon Company established in 1860. He also took an active role in the public life of his adopted city, serving on the city council as a Conservative and being elected Mayor in 1859(100 years prior to my birth) and again in 1862. He helped to set up the Gloucester City Rifle Company and was an active organiser of the Grand Volunteer Review held in Gloucester in 1860.During his second term as Mayor, he helped to establish penny entertainments for working men and often assisted both as singer and reader .The timber importing business must have suffered a set-back in 1865 when the two partners, Baxter and Hooper, both died when only in their late thirties.Somehow Nicks managed to keep the enterprise going.  Over the next few years, Nicks &amp;amp; Co dealt with 15 to 20 ships a year, bringing sawn deals, baulk timber and some railway sleepers from Canada, the Baltic ports and Archangel with occasional cargoes of pitch pine from the United States of America. The trade in slates continued but at a lower level than previously due to competition from the railways .In the late 1860’s the partners built their own sawing, planing and moulding mill at a new site at Canada Wharf, where the company still operates from with a cutting edge technology of the day a steam engine being fuelled by waste wood and cooled by water from the canal.They also built a creosoting works for preserving wood, the creosote being supplied from William Butler’s tar distilling plant on the river bank at Sandhurst.